You are here: Home

Art and a Story

Art and a Story 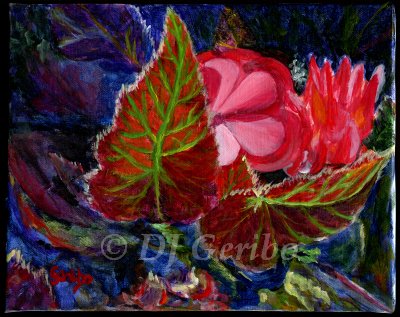 Every fall I bring in several plants that I have in planters on my back deck; the 2 geranium plants, 3 begonia plants, an impatient and a New Zealand impatient, a red dipladenia plant, and a red superba begonia. And then for a few months I can enjoy the beautiful flowers until late spring when I bring them outdoors again.

This year a few of the plants that looked near death bloomed so full and lush that I had to transplant them into bigger pots. The superba begonia lost all of its leaves and was nothing but a nub sticking up out of the soil. I thought it was dead for sure. But I kept watering it and not much more than a week or two after putting it outside, the leaves started to appear. Within a month or so I started to see flowers. And now as we near the end of summer, it is full of healthy leaves and covered with the bright red flowers.

The impatient, usually considered an 'annual' also responded to the outdoors and within a month or two I had to transplant it; the small pot could not hold all the flowers that came out. It was also pot-bound and I had to cut the roots away from the side of the pot it was in.

It is so rewarding to me to see plants that, although they remain mostly dormant during the winter months, with a little TLC, water, and sunshine, are eager to once again, flourish. Hopefully they will come back year after year.

Get my Art Apart Newsletter delivered directly to your inbox with news and information on my latest art work!

Since the shutdown of basically, the world, I have decided not to participate in any outdoor shows. All of my artwork can be purchased directly through me from my website. If you have any questions about a particular piece on my site, please do not hesitate to contact me concerning its availability and any other questions you may have. And thank you for your continued patronage.